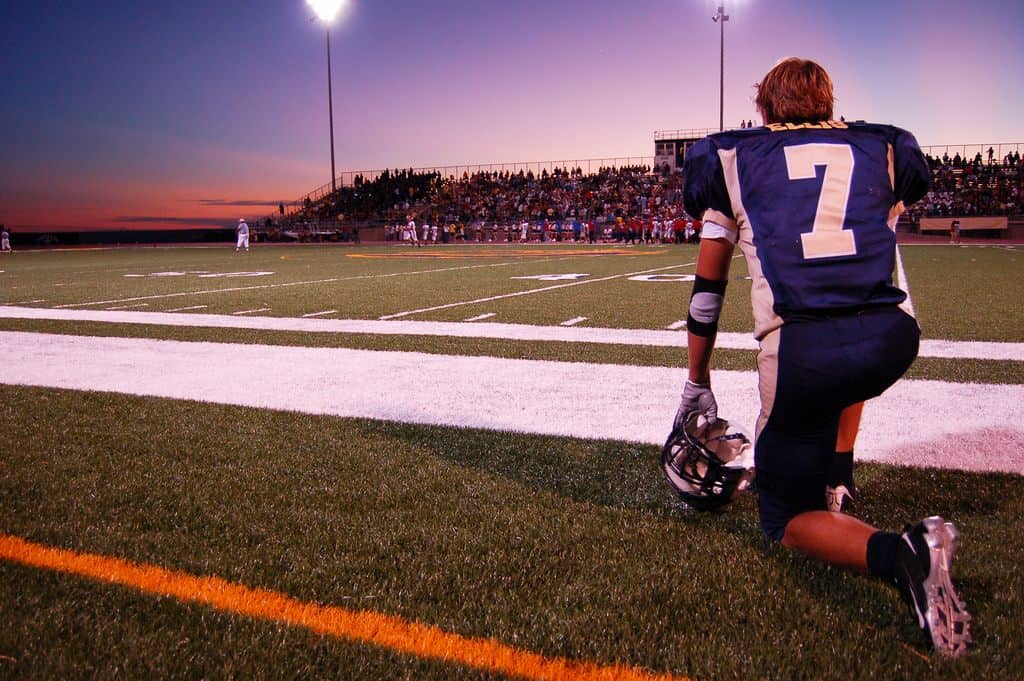 With four children involved in sports and other activities, our family spends a lot of time on the sidelines, especially at the football stadium. For all the hours I have spent watching tackle football, I have to admit that the game still confuses me. I’m still pretty fuzzy on what the players are doing, or even what they are supposed to be doing.

However, one thing I have learned is what is expected of me, the spectator. Sideline behavior has its own etiquette. At no time is this more essential than when a player is injured, and all follow the protocol of “taking a knee.” When a player falls, teammates and others on the field do this literally; those in the stands show their respect by quieting voices and actions. Usually, it isn’t long before the player is met with applause as he either 1) returns to the game or 2) limps off the field. Only then does play resume. Taking a knee may be a game time courtesy, but it is still a sacred ritual—one considered impolite, even offensive to ignore.

Recently, I witnessed the full extent of this custom when one of our high school football players was seriously injured. Minutes dragged by endlessly as an anxious crowd watched and waited for some sign from the field. The gravity of the situation unfolded as an ambulance pulled into the stadium and a stretcher rolled across the field. At long last, #2 was wheeled away, but as he did so he slowly lifted his arm into the air, giving a heartwarming “thumbs up” to the cheering crowd.

I feel privileged to have witnessed such things, finding in them a touching reflection of something human beings have known for centuries—that there are times when pain and suffering demand a little deference, even ceremony. Loss—especially loss of life—commands respect, and we who witness hurt are called to honor the hurting properly. We see a perfect example of this in the Jewish mourning ritual of shiva. For starters, mourners customarily sat on low stools or the floor, symbolizing the emotional reality of being brought low by grief. God’s chosen people knew how to take a knee.

For me, the practice raises this question: Are we giving due consideration when our teammates fall? Even before we offer comfort and assistance, are we pausing to pay our respects? Could we as believers “mourn with those who mourn” more thoughtfully if we, too were to take a knee? If we did, perhaps “football shiva” would look something like this:

While there is still plenty I don’t get about football, I’ve learned a lot from this time on the bleachers, thankful for wisdom I can utilize on and off the field. I realize that I don’t have to make sense of life in order to participate in it, and while I may be clueless as to what to say or do, God is still able to use me to serve others. Finally, I’ve learned that suffering should turn me instinctively to God. When knocked down by life, before I do anything else, I need to lift my gaze to the Comforter, Healer and Giver of Life . . . to humbly, and respectfully, take a knee.