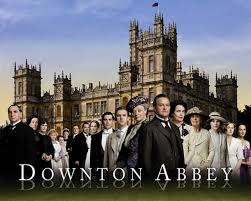 Ask any Downton Abbey diehard, and they are sure to have an opinion on the latest episode. While not everyone is tuned in to the series, those who do never fail to weigh in. Scarcely a week goes by that Downton Abbey doesn’t elicit a firestorm of reaction wherever fans are gathered. Downton Abbey has generated such a storm of heated reaction and controversy that Masterpiece Theatre has created an online discussion forum for viewer debate.

What is it about Julian Fellowes’ creation that generates such strong emotions? How did we get so personally involved with something so foreign to us? After all, we have to cross an ocean, a century and an archaic class system in order to get there.

However, Downton Abbey’s portrait of the aristocracy addresses issues common to all. Even if we can’t identify with the characters, we can sympathize with the complexities of life they experience. Downton’s delicately-shifting lifestyle creates the perfect backdrop for some powerful realities, allowing us to view timeless truths through an historical lens. I for one can’t help but be inspired each week by the saga of Crawleys and their numerous staff.

Lesson One: Life is Full of Plot Twists

It was a typical weeknight in the Watts home. My husband was playing with our dogs outside, and I had just sat down to write when—WHAM!—a thud and a whimper by the back door caught my attention. Outside, I found Brent kneeling on the ground by our dog Eddie, who was shaking and unable to stand. Together we sought to comfort our pet and move him into the warmth of the house as we tried to assess his injury.

Meanwhile, my thoughts raced anxiously forward. How badly was he hurt? Did this mean a trip to the after-hours clinic? Expensive vet bills? I saw my “ordinary evening” scene dissolving into an entire chapter of animal trauma. Happily, Eddie’s injury was so minimal that he recovered with sitcom-worthy speed, and soon we returned to our “regularly scheduled program.”

If there’s one thing Julian Fellowes does well, it is shock us with unexpected turns in the story line. When it comes to scenes that stun and horrify, he’s right up there with Stephen King and Wes Craven. The moment we settle down to enjoy pictures of everyday life at Downton—WHAM!—along comes another plot twist that knocks us breathless in horrified disbelief.

Did that really happen? Why on earth would they put that in the story?

The truth is that real life is full of plot twists as shocking as anything Fellowes could write. My own “cast of characters” has certainly experienced its share. Our image of happily-ever-after was shattered last year when my mother-in-law suddenly lost her sight. Up until that moment, she was enjoying the role of spry septuagenarian, so full of boundless optimism and energy that we expected her to outlast us all. Then—WHAM!—a burst blood vessel destroyed the vision in both eyes—an occurrence so traumatic and rare her doctors had to search through fifty years of medical literature to find another documented case.

We have watched, helpless and broken-hearted, as Brent’s best friend surrendered a storybook life to the nightmare of cancer. A brilliant lawyer, loving husband and devoted father, Dirk was happily anticipating the birth of his third child, when—WHAM!—what appeared as the flu turned out to be a brain tumor.

Just this past year, our sister church mourned their senior pastor of thirty years after a serious illness. Even as they labored in the midst of their grief to continue to work of the church—WHAM!—the associate pastor was killed in a head-on car collision.

And it wasn’t so long ago that our community witnessed an event so tragically bizarre it made national news: a local pastor was electrocuted in the baptistery before his entire congregation.

Seriously, who writes this stuff?

Thankfully we can find some sanctuary in the Abbey. Its generous halls and vast estate invite us to vent our outrage and frustration with careless abandon. When tragedy strikes Downton, we can blame it on heartless and ambitious actors who desert the show in search of greener roles. If the drama gets too intense, we just change the channel or turn off the set. If we are that offended by Fellowes’ work, we can even boycott his show altogether. Such things are possible from the safety of the audience.

Real life, however, is much less accommodating. It doesn’t always provide ready sympathy or obvious scapegoats. No matter how tempted we are to tune out or shut down, ultimately there is no escape from our own story. And even while it is acceptable to declare our undying hatred for Fellows and his atrocious storylines (and there is always an angry mob calling for his head!), how will we respond to the One who authors our lives?