Ever since I declared that fearless would be my “one word” for 2015, friends have been asking how I came up with that particular word.

To be honest, it didn’t take a whole lot of thought. See, I’ve spent a lot more of 2014 than I care to admit feeling fearful. All the way from mildly anxious to completely petrified.

Fear is at its worst when I’m driving. These days driving is harder than it used to be, and that makes it scarier. It seems that my night vision—which was never all that great to start with—has gotten much worse since my last new pair of glasses.  I’ve been scared to drive at night because it’s much harder to see at night. Let’s face it—driving when you can’t see well is positively terrifying.

It doesn’t help that I have to drive in strange cities a lot—sometimes at night—which means now I have to navigate, too. In the dark. Where I can’t see well. At least when I’m in my own backyard, so to speak, I kind of know where I’m headed.

And don’t even get me started on how many times I’ve had to cross my home state flanked by truckers and highway construction along Interstate 35, aka “The Corridor of Death.”

All this means that I have spent a lot of time on the road with a death grip on the steering wheel. Driven by fear—and hating every minute of it.

How I miss those days when I was absolutely fearless in a car. As a young adult, I was invincible—caution was for cowards. While my audacity did catch up with me on occasion (we won’t even go there!) it didn’t slow me down for long. I continued to zip up and down Texas highways with glorious abandon. As a matter of fact I did own the road, thank you very much!

Where did that girl speed off to? Somehow in the last three decades, I’ve left my nerve along the side of the road somewhere.

And fear has taken its place.

And just to make matters worse, in the last four months alone the Watts family fleet has been party to four—count them, four—separate car collisions. Three of which I’ve been in. Two of which I’ve been the one behind the wheel.  Even the best Invincibility Shield shatters like fiberglass once you feel the impact and hear that horrifying crunch of metal against metal.

How do I move forward and reclaim the road, free from fear?

Unfortunately, there isn’t much I can do to reroute my driving responsibilities. And I can’t keep always bad things from happening no matter how cautiously I drive. But there are a couple of essential course corrections I can make:

For starters, there have been some changes to help with nighttime driving visibility. First Brent cleaned the heck out of the car windshield. And I’ve also gotten better contacts that have helped things tremendously.

The road is a lot less scary once your vision is totally clear.

More importantly, I’ve decided to adjust my spiritual specs (a writer I admire calls these perspectacles). I’m going to refocus on life through the lens of fearlessness. The kind that God prescribes.

Here’s my personal prescription for the “one word” challenge:

Given that it takes 21 days to establish a new habit, every day for the next three weeks I’m going to take at least one concrete step toward fearlessness. Today I began by changing my password to include the word fearless. God‘s Word counsels us to do such things to ingrain his Truth on the mind and heart:

Make the things I’m commanding you today part of who you are. Do whatever it takes to remember them: tie a reminder on your hand and bind a reminder on your forehead where you’ll see it all the time. Deuteronomy 6:6, 8 (The Voice)

Meanwhile, I’ll continue to share my adventures along the road.

What will your “one word” be this year?

Postscript: I left this post to run errands with my husband (he drove). We had just hit the open road when You Make Me Brave (Bethel Music) came on the radio. Here are the lines that seemed to sing out just for me: 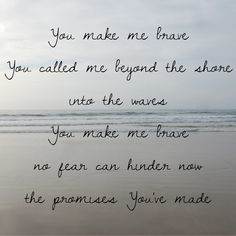 (Gotta love those lyrics “in due season,” right?)