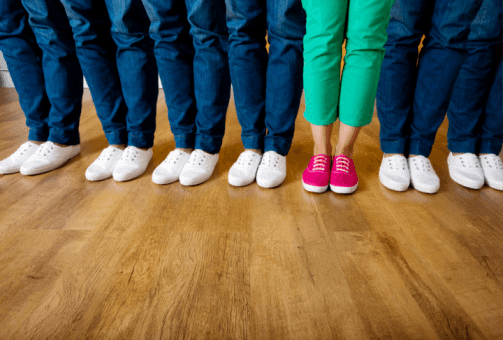 Conform, conform, I really must conform. To think that I should be myself would cause me alarm.

Conform, conform, I simply must conform. I’d die of fright at the plight of living on my own.

Which is more important? Security—or identity? The catchy tune from summer camp sang of my own preteen dilemma. There is safety in numbers—but freedom in standing alone.

I’ve always been torn between these two competing desires: the longing for acceptance and the need for independence. As a young girl first discovering who she was and where she belonged, I wanted to fit in and stand out.

Long after junior high, I continued to struggle with this contradiction. Two things I hoped to avoid at all cost: blending into the crowd so well that no one noticed me—and moving so far from the crowd that no one could understand me.

Fast-forward to adulthood, when I happily embraced a conventional lifestyle. I became a wife, a mother, and a regular fixture in our little stay-at-home mom community.

I fit in. But I sure didn’t stand out. And so the search for distinction continued.

That changed as I came to know the One who made me, and who alone could truly make me special. I accepted an invitation to follow Christ, which was followed by another life-changing invitation:

Would my husband and I transform our traditional family through international adoption?

When we agreed, everyone was shocked, including us. After all, we had two biological children already. Such an unorthodox move raised some eyebrows. That’s when God reminded me I had never wanted to look “just like everybody else.”

Before long we joined the rank of prospective adoptive parents, enduring the customary round of paperwork, home visits and long waits. However, God wasn’t finished singling us out:

We learned we were to expect two babies—one by adoption, and another by birth.

The news that I was pregnant and still adopting caused more than a few raised eyebrows. Many doubted our decision; others just questioned our sanity.

In due time, I delivered our son and left for China to collect our daughter. At that point I would have given anything to be ordinary. After all, most women don’t stay away from their newborn babies for long. “Normal” mothers don’t fly halfway around the world shortly after giving birth. And the typical adoptive parent doesn’t have a nursing infant at home.

I missed my infant son terribly even as I struggled to bond with our new daughter. Never had I felt so terrified, or so alone. I had moved so far from the crowd no one could understand me, let alone help me.

I thought things would get back to normal once I returned to home and family, but even there I felt just as isolated. Now that I stood out, I no longer fit in.

Nonconformity isn’t easy. It comes with ridicule, rejection, loneliness or fear. But such is the price of extraordinary life.

As the months passed, my life became more routine—but it never went back to normal. My family had been changed forever, and more importantly, so had I.

With no one else to turn to, I had become wholly dependent on God. I surrendered my comfortable but average life for one that promised real distinction. I traveled thousands of miles . . . only to end up at the foot of the cross.

I stopped following the crowd and just kept walking in the footsteps of my unconventional Savior.

Sometimes God singles us out to set us apart. If we are willing to be different, he can use us to make a difference. When we sacrifice our ordinary for his remarkable, we point others to a remarkable God.

And if we refuse to look “just like everybody else,” we can be transformed more fully into the image of Christ.

Do not conform yourselves to the standards of this world, but let God transform you inwardly by a complete change of your mind. Then you will be able to know the will of God—what is good and is pleasing to him and is perfect. Romans 12:2 (GNT)